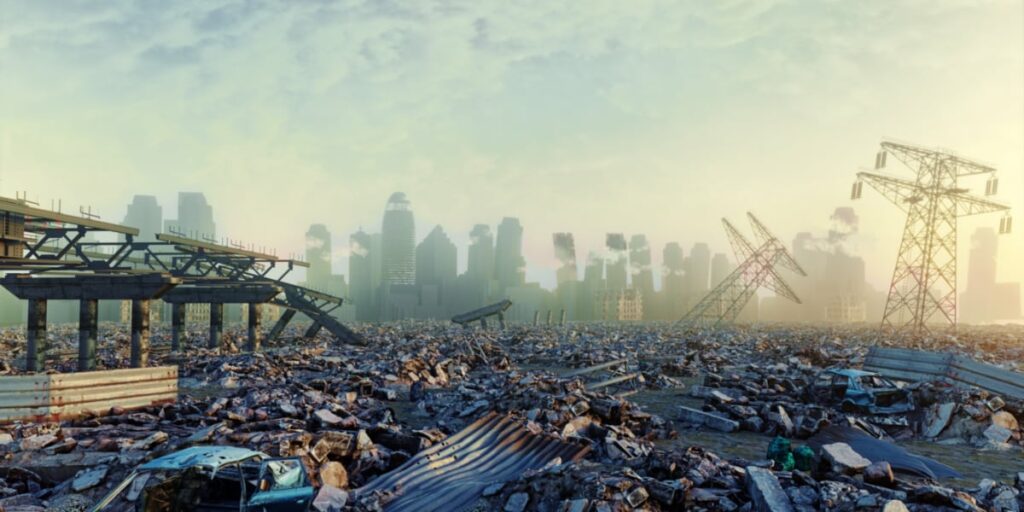 “Is deconstruction biblical?” It may not be the best question, given 2/3 of it is made up of deeply problematic words. “Biblical” is a term that represents, for so many Christians who are wrestling with their faith, the very problem they’re trying to untangle. It conveys a sense of fixed meaning and divinely sanctioned conviction that often leads to toxic rigidity.* Neither is “deconstruction” free of problems; even many progressive Christians seem to have tired of it. And there is a growing worry that spiritual deconstruction leads only to chaos and nihilism, leaving us with nothing but rubble. The world is troubled enough as it is; why are we tearing things down when we should be looking for signs of life and hope?

It may be a tedious question, and yet it may prove helpful. For the Faith and Justice Network, it’s a question that has very much been in the background of the work we do together. After all, even if we set aside the question of whether it’s biblical, deconstruction appears to be a frequent and prominent motif in the Bible.

Deconstruction in the Psalter?

The Psalter, for instance, is full of songs expressing what sounds like deconstruction. The Old Testament scholar Walter Brueggemann uses “disorientation” to describe a loss, or tearing down, of belief systems once held dear. To take one example, if Psalm 1 is a song of orientation, Psalm 73 is one of disorientation.

Psalm 1 declares that the righteous prosper and the wicked face destruction.

Psalm 73, however, laments the prosperity of the wicked.

The source of confidence in Psalm 1 becomes a source of crisis in Psalm 73. Put another way, Psalm 73 deconstructs Psalm 1.

Whatever we may choose to call it, there is in the Psalms a progression and a journey to seeing God in a different light than before. And it is the prevailing pattern of many of the stories we find in the Bible: people thinking they’ve got God figured out, getting their myriad misunderstandings exposed, coming to a slightly better, revised understanding of God, only to have it all come tumbling down again in due course.

If this sounds exhausting, welcome to life in relationship with just about any human being. Everyone I love and respect and care about has, at one point or another, made me question what I think I know about them, often in good ways, but also in challenging ways. Why wouldn’t we have that same experience in our relationship with God?

Deconstruction in the Gospels?

In the New Testament, the opening chapters of John offer a series of acts in which Jesus appears engaged in work that might aptly be called “deconstruction.”

In John 2, Jesus tells the religious leaders to tear down (de-construct) the temple. The Sadducees, who could not fathom the destruction of the temple – not to mention their elaborately constructed temple religion – fumed with anger.

In John 3, Jesus tells Nicodemus to be born again, to unlearn what made him a respectable grown-up and spiritual leader. To this Pharisee, Jesus declares: tear down the life you’ve built for yourself. Nicodemus went away discouraged not because he didn’t understand Jesus but because he understood too well what Jesus was asking of him.

In John 4, Jesus tells the woman at the well to tear down her liturgical obsession with a singular place. For when Jesus informs her the time will come when she will worship God neither on this mountain nor in Jerusalem, it’s not so much that Jesus was declaring the irrelevance of particular places. Instead, he was telling her that every place can be a site of true worship. For by restating the contentious argument of Samaria’s primacy over Jerusalem, she had revealed her fixation on a new Jerusalem of her own making.

(Also, who thinks it matters that one of the most incisive, sophisticated, thrilling theological conversations in all of the New Testament happens between Jesus and an unnamed woman?)

Not the Final Word, but Still a Good Word?

Many of us have tired of hearing about deconstruction. Most days, it’s frankly the last thing I want to think about. But the good news is that just as disorientation paves the way to new orientation in the Psalter and just as the tearing down work of Jesus always envisions resurrection and new life, deconstruction today can be a profoundly hopeful and restorative act. When all is said and done, we can revisit and revise aspects of our belief system not because of some warped obsession with debris and rubble but because we are animated by the belief that we can do better. We do this work because hope persists, and there is a long-suffering cry we cannot ignore in us and around us that the world can be a better place.

Our Spring Theme Is All about Deconstruction that Leads to Hope

In the Faith and Justice Network, Christian hope is the reason we do the work that many decry and dismiss as “deconstruction.” We wrestled with it throughout the fall and we’ll do it again in the coming months.

In February, we’re asking questions related to race and justice by reading a book called Resurrection Hope (hope that comes from the place of death, disorientation, deconstruction!) by Kelly Brown Douglas. In March, Beth Allison Barr will show us how biblical womanhood is a man-made lie. In April, we’ll learn from Devin Singh and D.L. Mayfield about the sacred power of money and the myth of the American dream. We’ll wrap up our spring series in May by looking toward world Christianity and interfaith relations.

Best of all, for the first time, anyone can join us at any time for these conversations as we are opening up the Faith and Justice Network to a monthly or annual subscription. That means you can join our community today without waiting until the fall!

For more details about the schedule, our speakers, and the books we’re reading, visit our home page – and consider joining us in the work!

___
*On the question “What is biblical?” and related matters, some helpful resources for me have been Mark Noll, Jesus Christ and the Life of the Mind and Brad Gregory, The Unintended Reformation: How a Religious Revolution Secularized Society.

Peter is Director of the Center for Faith and Justice and also serves on the Core Doctoral Faculty of the Graduate Theological Union. The author of George Whitefield: Evangelist for God and Empire (Eerdmans, 2018), his next book project is provisionally titled Subverting Faith: Early Evangelicals and the Making of Race (under contract with Oxford University Press).
Scroll to Top